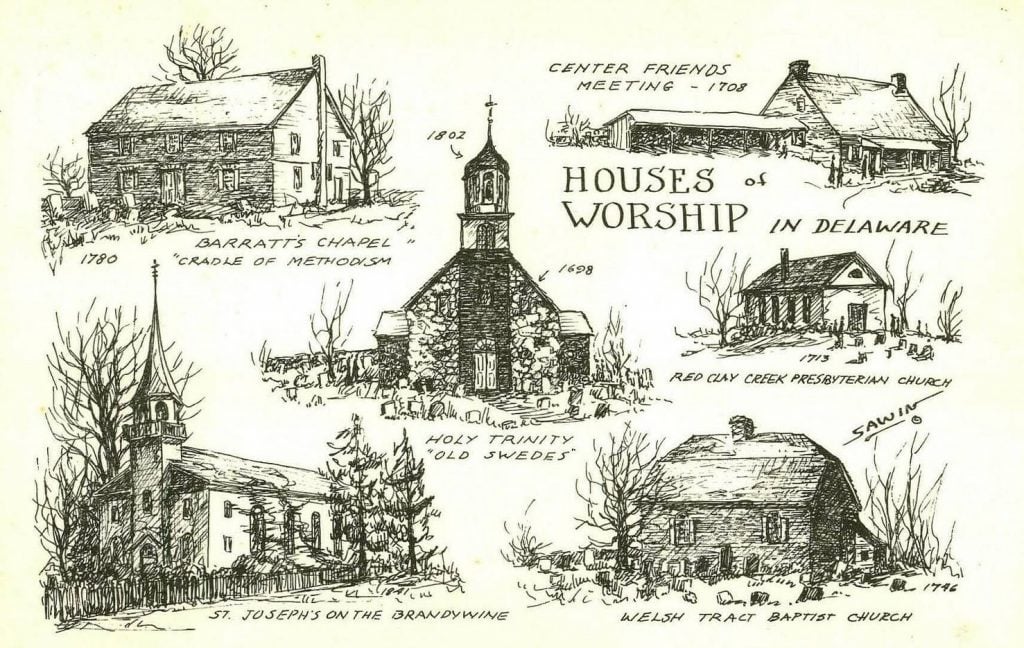 This work is a compilation of marriages, births and deaths of Kent and Sussex Counties, Delaware, taken from the surviving church records. In addition there are a significant number of records for persons living in lower New Castle County. Almost all of these records are held by the Hall of Records, Dover, Delaware, with one notable exception; the early Quaker births, deaths and marriages of Duck Creek beginning in 1686 are not found there. However the latter vital records for Duck Creek and Murderkill Monthly Meetings vital records are held by the Hall of Records in the form of a typescript copy. These are records of Duck Creek and Murderkill which were included with the Camden Monthly Meeting records some time after its formation uniting Duck Creek Monthly and Murderkill Monthly. Microfilm copies of the originals of all of these Quaker records are held by Swarthmore Historical Library, Swarthmore, Pennsylvania.

At Newport, on the 8th [Feb 1892], Mary E. Gamble, wife of S. Griffith Gamble.  Relatives and friends are invited to attend the funeral from the residence of her husband in Newport on Thursday the 11th without further notice.  Services at the house at 2 p.m. Contributed by:  Shelli Steedman

The funeral of William R. Flinn, late United States marshal, who died at the Homeopathic Hospital after an illness of three weeks [November 24, 1910], took place from his late home, Newport, at 2 o’clock this afternoon.  It was largely attended. Services were held at the Flinn residence, the Rev. J. H. Mitchell, pastor of the Newport, M. E. Church, officiating.  Interment was made in the St. James Cemetery. The pallbearers were:  J. W. Mitchell, J. Frank, White, Samuel Kilgore, Marshall Johnson, John A. Cranston and William Atwood Weldin. Contributed by:  Shelli Steedman

William R. Flinn III, 65, of 25 N. Centre St., died Friday [December 6, 1974] in Cooper Hospital, Camden, after a short illness. He was an English teacher, principal of Merchantville High School and superintendent of both the high school and Merchantville Elementary School before retiring in 1971. Mr. Flinn is survived by a sister, Mabel A. Flinn of Philadelphia, PA.  He never married.  Services will be tomorrow morning at 11 at Trinity United Methodist Church, Maple and Chapel Aves., Merchantville.  Friends may call tonight at the Stephenson Funeral Home, 33 W. Maple Ave., Merchantville.  Interment will be in St. …

On Jul 31 [1884], Mabel A., daughter of William R., Jr., and Emma [Collins] Flinn, aged 6 months.  The relatives and friends of the family are invited to attend the funeral on Saturday afternoon at 2 o’clock from the residence of her parents near Newport.  [Interment St. James Episcopal Church] Contributed by:  Shelli Steedman

On first month, 30th [January 1898], Howard E. Flinn, in his 65th year.  Relatives and friends are invited to attend the funeral from his late residence near Newport, Del., on the 4th day, 2d month.  Services at house, 2 p.m.  Interment at St. James Cemetery, Newport, Del. Contributed by:  Shelli Steedman

Mrs. Emma Collins Flinn, 79, widow of William R. Flinn, formerly of Newport, died at the home of her son-in-law and daughter, Mr. and Mrs. James T. Challenger on West Sixth St., shortly after 7 a.m. today [August 23, 1929].  She had been suffering from complications due to age for the past three weeks. She was born in Pennsylvania, the daughter of Mr. and Mrs. James Collins.  She was a member of the New Castle M. E. Church and had made her home with Mr. and Mrs. Challenger for the past 19 years. Mrs. Flinn is survived by one daughter, …

W. Roger Cranston, 59, of 7 Crestwood Place, Hillcrest, died yesterday in memorial Division after a long illness.  For 23 years, Mr. Cranston was an accountant for the DuPont Co., retiring 10 years ago from the treasurer’s department. Born in New Castle, he lived in Hillcrest for the past 30 years.  He was a member of the Hillcrest Methodist Church, Hillcrest and Marsh Roads, and a member of the Wilmington Optimist Club. He is survived by his widow, Mrs. Catherine Wyatt Cranston; two daughters, Mrs. Letitia C. Colper, Dartmouth Woods II, and Mrs. Linda C. Hamory, Faulkland Heights, and one …